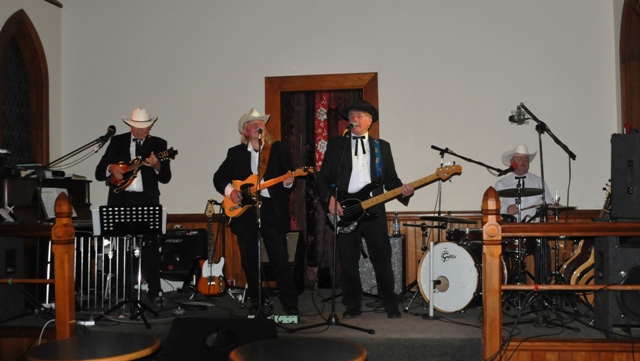 The Pistons are a Christchurch based band available for Pubs, Clubs, Small Cafes / Bars, Private Functions and Weddings (great for themed functions).
For bookings contact Sandy 027 4344470

The core of The Pistons music is Rockabilly and Alt Country, although with the help of Sandy Inglis multi instrumentalism their Pub repertoire extends to Rock’n Roll, Irish and Americana. The Pistons formed over 5 years ago, originally as a three piece featuring Upright Bass, Guitar and rudimentary drums, but then progressed to include Pedal Steel. Over this time The Pistons have been well received at Christchurch Venues such as The Miller Bar, Woolston Club, New Brighton Rockabilly Car Show, and Country Pub's such as The Plough, The Famous Grouse and The Sheffield. For the last three years the line up of members has been Sandy Inglis on Vocals, Pedal Steel, Mando, Guitar, Fiddle and Harmonica: Arch Kuiper on Guitar and Vocals: Richard Peters on Electric Bass and Vocals: David Salmon Drums and Vocals:
Sandy , Richard and Arch have a long history in playing music ranging from Blues, Jazz, Rock’n Roll to Covers on the Christchurch dance, club and Pub scene. David received his musical education in the South Island but gained his experience drumming on the Auckland originals scene for 12years with Bands such as Stolen and Outside In, before moving south and joining The Pistons. The Pistons have the added strength of Richards experience and expertise in Choral singing, allowing confident vocal delivery.

The Live Recording done at Greendale has now been produced and can be checked out on our 'Demo Songs' page.
CD's are available.

the gigs are starting to gather momentum. We recently played at a Retro/Rockabilly Mid-Winter Xmas dinner at the Pierside Bar New Brighton. We were hoping to be introducing a Double Bass to our arsenal (as Richard becomes familiar with it) but technical issues did not allow it.

Domestic/Commercial HVAC Controls and IT Development

A piston is a component of reciprocating engines, reciprocating pumps, gas compressors and pneumatic cylinders, among other similar mechanisms. (wikipedia)

It is also a cool dude who plays in a realy hot band!!!